Boxes are so appealing to cats, so why is that? 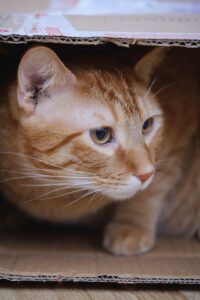 Photo by Peng Louis from Pexels

Playing with cardboard boxes is a favourite pastime for your cat, right? Does the cat sometimes prefer being in a box to its comfortable bed?

As a survival instinct

Even though cats are unlikely to encounter anything in the home that would want to harm them, their instinct to avoid predators persists. To remain calm, cats need a place where they feel safe, so they sleep most of the time. Your cat sees a box as a cave, a place where they are safe from any danger. In addition to allowing them to isolate themselves from the outside world, it also becomes a private place. They enjoy the peace and solitude of a simple box.

A cat in the wild is a predator. No matter where your cat lives, its natural hunting instinct can be seen. Due to the darkness of their box, the cat feels they are well-positioned to catch their next prey since the box offers them a sense of surprise. As a result, they can prey on toys, human legs, or even some insects that pass by their hiding place. Your cat exercises its hunting instincts while inside the box.

Whether lying in the sun, hiding between the sheets, or hiding in closets, your cat loves to be in the open air. The warmest and most comfortable spots for a cat are in the open air. Providing a warm shelter is easy with cardboard boxes since they act as insulation.

Curiosity is a hallmark of cats. Every time a cat smells, bites, or sticks its head into something, you can be certain they are interested. Thus, if you have brought something packaged in a box, they cannot help but investigate.

Material of the box

The box material should have a rough texture for cats to scratch and bite. Scratching is another activity cats enjoy. In addition, they can mark their territory with ease and sharpen their claws.

According to researchers at Utrecht University in the Netherlands, the box helps cats cope with stress.

The research was conducted at a shelter where 19 new animals were selected. Cats are often nervous in new environments. Many unknown individuals and animals are present in these environments. Ten of the chosen participants received boxes, and nine others did not. Following a few days, it was concluded that cats who had access to a box adapted more quickly than those who did not. They could retreat to their own space when the environment became stressful.

What Are The Best Diets For Cats?