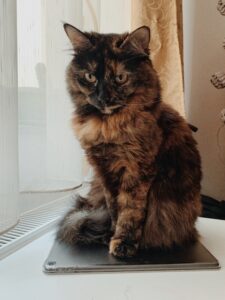 I’ve always had a soft spot for cats, which I think is because my family always owned at least one. At one point, I was without a cat in my home. In the same year, my dog died, and I felt empty. The animal shelters were all closed due to a certain virus, so I wanted one for her. I would browse every shelter site I could find, looking for cute cats that could live with dogs in my free time. But she passed away soon after. It felt right to get a kitten in her memory.
My kitten fever grew after I saw so many videos of adorable, loving kittens. I expected the kitten to snuggle with me and sleep next to me. My excitement at getting a kitten was short-lived, however. As soon as I could finally catch a wink of sleep, I would be rudely awoken by a fiend bent on ripping the flesh off my ankles. The situation called for drastic measures. My phone was constantly ringing with the local priest. If I don’t fix this problem soon enough, that cat will end my life. It was my goal to make her love me more than anyone else. It worked, sort of. Despite some being more protected than others, she didn’t love anyone. I wanted to love her, but she wasn’t interested in it! She always scratched at it. I always get bitten and scratched when she sets belly traps for me. As soon as I pet her, all hell breaks loose.
After spending hours outdoors, she would cry every time I let her in the garden. The kitten was like a little Houdini constantly preparing to break free from me, who she considered an oppressive captor. On one occasion, she succeeded. Our neighbours had already turned in for the night. The stars were her only company. Whenever she was away, my heart broke. I wondered if she had become dinner for a hungry fox. Because of these thoughts, I left my garden light on for her to see where her house was. Over an hour later, she came back, ate food, and used the litter box! I made sure she was carried when the door was open so she couldn’t leave unless it were a good time.
She strikes when the moon rises. Also, I am not a stranger to midnight nibbles. She refused to wear any of the cute costumes I bought for her. It is impossible for me not to envy those Instagram pets who seem to enjoy their fabulous fits. I would have to employ the assistance of others if I attempted to dress her. Though I have made an overarching effort to dress her, I have not been successful.
I got as close as I could when I attached this bandana, one of many Halloween costumes (which she did not wear). Her favourite pastime is parkour, and she will frequently launch herself off furniture in the hope of chasing something only she can see. Devils, it must be! As with many before it, one night would become one of my worst memories of my cat. While I held her outside in my garden, her favourite spot, she decided to dig deep into my skin with her claws for no apparent reason. In an attempt to free her, I tried unsuccessfully. She had dug her claws too deep. Blood trickled down my back as my clothes were torn upon being released. As if I deserved this fate, my cat remained unmoved as ever.
No one can take her toys or steal her murder mittens. Even when I play with her using toys on strings, it seems as though I am ever more alluring to her, resulting in her attempting to catch me instead of the feathery toy. Her high and straight jumps onto my fence are impressive, and she’s still a kitten! Maybe she’s planning to escape after she kills me.
You know what happened to me if I don’t write after this…

Here are six reasons cats enjoy sleeping with you