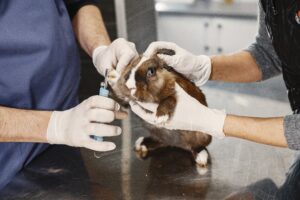 Photo by Gustavo Fring from Pexels

On one day at work, I was responsible for deep cleaning the habitats of guinea pigs. Since there were only a couple of guinea pigs on the floor, I didn’t have to spend much time cleaning them. A small bald spot appeared on her nose as I was emptying one of the pigs’ habitats. My coworker told me that the pig is infected with ringworm. Because I wasn’t wearing gloves, I freaked out because I had touched other guinea pigs before I noticed the bald spot.

The guinea pig with ringworm didn’t know where to go to prevent infecting anything else. I was instructed to put her in a small pet carrier so that she would not be able to move too much. To make sure she doesn’t do her business in the carrier, we placed paper towels in it. Her time in that carrier was supposed to be no more than 15 minutes, but she ended up staying in it for over an hour.

The front of the store made it impossible for me to quarantine the guinea pig. Afterward, my manager came into the office and ordered me to create a new quarantine area for her. On checking on the pig, I found her paper towel drenched in her own pee and her feces scattered around it. As a result, I gave her a snack of fruit and some vegetables to drink to keep her hydrated. It upset my manager that I was not wearing the proper equipment, yet I was not informed that gloves were required when I handled animals on the floor. When I accepted this job, I did not receive the proper training. The importance of training your employees when it comes to handling animals cannot be overstated so they don’t have to deal with situations like this. As a result of a lack of training, things like this happened pretty much every week with different employees. Especially behind their ears, some guinea pigs are born with bald spots. If they start growing abnormal bald spots, it’s important to see a vet or treat them at home. It is possible for Guinea pigs to become seriously ill if they are not treated properly and caught in time, which can result in their deaths.

What is the longest a lizard can go without food?