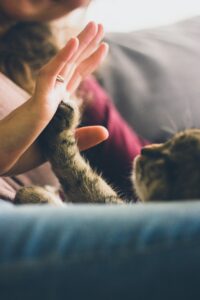 This weekend, I heard about another study

.carried out to figure out how cats work. The study was from Japan, in which they found that cats map their human’s location by using their ears.

According to the news report, the study also found cats to be more imaginative, creative and caring of people than previously thought. I didn’t read the original study, so I can’t comment on it. News reporters aren’t always entirely accurate when reporting the findings of a scientific study, so who knows what the study says? Hence my interest in the study. I was irritated by the news reporter’s statement that cats might care more than we think. Science only confirms that cats love you to non-cat people.

What are the signs that my cats love me?

On my lap, my cats fight over who gets to sit. Ebenezer currently occupies the coveted spot. During the past five and a half hours, Ebenezer has been snuggled up next to me after I rescued him from Fat Zombie’s middle-of-the-night bullying spree shortly after midnight. Ebenezer is lying on top of the Muffin Man. He considers my lap his personal property and cannot stand that others keep stealing it from him. I’m lucky that Muffin Man and Ebbie get along so well. They are both prone to temper flare-ups, however. There is a good chance that a fight will break out on my lap at any moment. Since I got home last night, they’ve been extra clingy. On Saturday, I spent the night at my parents’ house four hours away. Despite being gone for about thirty hours, they probably decided that I would never return.

I want to stay at home with my cats. They start to rub up against me when they see the suitcase filled. Usually, one of them attempts to smuggle themselves into the case. I once had Hoover pee inside my suitcase because he had tried to thwart my plans to travel. Fortunately for him, my clothes did not become soiled. Everything was thrown into another bag, my suitcase was cleaned, and I was on my way. Winnie insists on being picked up and carried every morning while I get ready for work. But what’s the hardest part? Make sure she doesn’t eat my lipstick.

I’m most beloved by my cats.

I am not anyone’s favourite person, and I accept that. That’s what it’s like to be single and childless. Humans love me a lot, and I’m at the top of their list – but their spouses and children are probably more important than me.

But what about my cats? It’s no secret that I’m their favourite person in the world. At the moment, I have two cats on my lap and one meowing for my attention. My third kitty, Sweet Zombie, just got up on my desk to ask if there was any room for him on my lap (there isn’t). As a result, he is perching on my desk. I live with cats every day. I live in a small, cozy cabin with five cats (although Fat Zombie spends part of his day outdoors). I live with five cats in 550 square feet (although Fat Zombie spends some time outside). Our small space has made us closer. A couple of hours every day, my cats would disappear into the basement when I lived in a bigger house. While I’m away, my sister feeds the cats. According to her, they mostly ignore her.

Most cats seem to be introverted to me. I think they need some quiet time to recharge each day. It’s not that they’re distant or aloof. It’s that they’re resting. Science says that they use their ears to map where their humans are. Unlike dogs, they don’t have to follow their owners everywhere. They can keep an eye on their owners from afar.